At the conclusion of a seven-year investigation, a team of independent sleuths believes it has uncovered infamous skyjacker D.B. Cooper’s true identity.

Documentary filmmaker Tom Colbert, the leader of the cold-case team, held a press conference Thursday outside the FBI’s Washington, D.C., headquarters, to announce his investigators’ findings and accuse the Bureau of hiding evidence in the case.

“It’s more than a bunch of old guys chasing another old guy over forgotten history. This is about current FBI agents stonewalling, covering up, and flat-out lying for mentors and G-men long gone, over decades — all because of an unholy deal to hide and protect a valuable CIA Black Ops pilot known as D.B. Cooper,” Colbert said in an email to the Daily News.

His accusations refer to the case of a man known as Dan Cooper, who in 1971 hijacked Northwest Orient Flight 305 and jumped off the plane with $200,000 in ransom somewhere over the Pacific Northwest. He disappeared, and the FBI concluded that he had most likely died from the leap.

But Colbert insists that the man who took over the flight is former U.S. Army paratrooper, pilot and explosives expert Robert W. Rackstraw, who is now 74 years old and living in the San Diego area.

In November 2017, Rick Sherwood, a veteran of the Army’s signal-intelligence corps and member of Colbert’s team, broke an encrypted code on a typed letter that was sent to newspapers 18 days after the hijacking.

The code on the letter, signed “D.B. Cooper,” revealed Rackstraw’s military units, according to Colbert. His team has since obtained copies of four earlier Cooper notes that they say are also encrypted and linked to Rackstraw.

“The new decryptions include a dare to agents, directives to apparent partners, and a startling claim that is followed by Rackstraw’s own initials: If captured, he expects a get-out-of-jail-free card from a federal spy agency,” Colbert wrote in a press release.

A letter mailed on Nov. 27, 1971, contains newly deciphered coding including the phrase “CAN FBI CATCH ME… SWS.”

The letter initials in the note are believed to refer to the Special Warfare School at Fort Bragg, where Rackstraw was taught the art of encryption in 1968 by Green Berets. 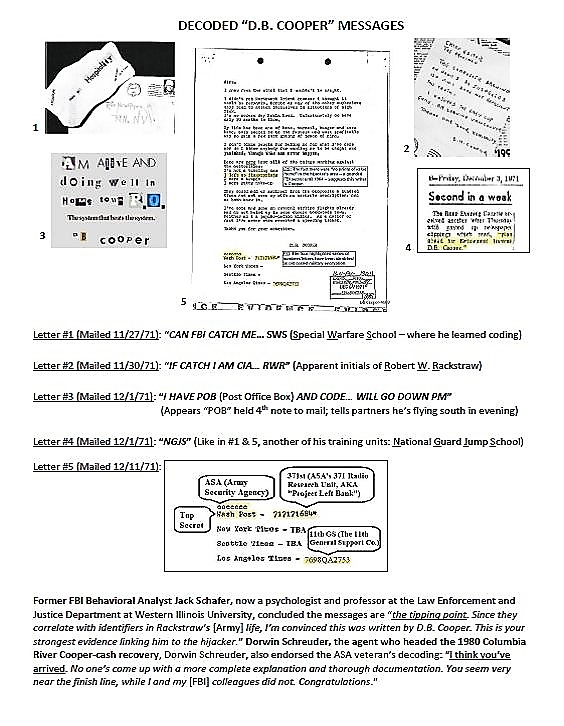 A third code appears to signal to his partners that he’s flying south in the evening, and a fourth makes reference to another one of his training units.

“Seattle agents were informed of Rackstraw’s letter trail years ago, but they ignored it, along with more than 100 pieces of other evidence, including DNA, from the 40-member team — ironically, led by retired FBI,” Colbert wrote.