The FBI may have closed the case on the unidentified skyjacker D.B. Cooper, but citizen-sleuth Tom Colbert and his cold case team are still chasing leads on the North Coast.

Colbert is offering a $500 reward for a 1971 photograph of a grifter who posed as a Swiss baron named “Norman de Winter.” That year, de Winter arrived in Astoria, charmed dozens of locals, took advantage of their generosity, promised many of them a free Christmas vacation at a château in Switzerland, then took off. He allegedly reappeared in Corvallis before vanishing again.

Soon afterward, on Nov. 24, a well­-dressed passenger wearing sunglasses and using the alias “Dan Cooper” hijacked a commercial flight from Portland to Seattle using a briefcase bomb. After the unaware passengers disembarked, Cooper extorted a $200,000 ransom, plus some parachutes, and ordered the pilots to fly him to Mexico. Somewhere over the Oregon and Washington border, Cooper skydived to freedom.

A candid picture of de Winter — for example, one taken at the 1971 Regatta Admiral’s Ball in Astoria, where the so­-called Swiss baron was an honored guest — would help establish whether he and Rackstraw are the same person.

“Hopefully, we can find a picture in somebody’s photo album of this guy,” Colbert said.

New accounts of de Winter
After the History documentary aired, Warrenton resident Phyllis Shatto — who knew de Winter and, in her words, was “enamored with him” — dug out two faded columns from The Daily Astorian in March 1972, recounting the mystery man’s Astoria escapades. And the articles contain some new, intriguing details (see columns below).

A source who met de Winter reported that the baron stopped by an Astoria electronics firm several times to inquire about purchasing some expensive radio gear for an “expedition to Canada,” the column reads. De Winter “claimed he had a friend in Canada and was going there to live for a year in the wilds. He was going to have the gear air­-dropped into the camp.” The firm’s owner arranged to buy the equipment but canceled when he heard the baron was a phony.

In addition, the baron claimed he was “a scientist and had an ‘underground research lab’ in Switzerland,” where he and his family were “developing a small suitcase-­sized heating system, with unlimited power.”

D.B. Cooper hijacked the Northwest flight with a briefcase containing what he told the flight crew was an explosive device.

Though the parallels do not prove anything, “they’re interesting coincidences,” Colbert said.

According to Colbert, one man who viewed the History documentary later emailed him, wondering whether the name “Norman de Winter” came from Dick Winters — aka “Normandy Winters” — the World War II hero who parachuted into Normandy, France, during the D­-Day invasion. Dick Winters was portrayed in the leading role of the 2001 HBO miniseries, Brand of Brothers, produced by Steven Spielberg and Tom Hanks.

Gifts from the baron
Shatto still owns a book — a copy of Kahlil Gibran’s “Secrets of the Heart” — that de Winter gave her at a dinner party she attended with her then-­husband, Richard Davis. She also saved two of de Winter’s letters, both sent in December 1971: an apology note (postmarked from Corvallis) calling off the promised getaway in Switzerland, and a Christmas card.

“He was very delightful,” Shatto said. “He was the most intelligent man I’d ever known at that time.”

De Winter — whose wealth, the article points out, never seemed to be liquid — did not try to take or borrow money from her. “I was only given things,” she said, adding that perhaps the fact that she lived in Astoria’s low-­income housing kept her from being a mark.

It wasn’t until The Daily Astorian published those 1972 columns that she discovered de Winter was a fraud.

“I think that that man I met who was entitled ‘Norman de Winter’ could have been anything … Why did he choose to be a con and rip people off?” she asked herself. “He was so … I just thought he was so talented and intelligent.”

When asked whether Rackstraw is de Winter, Shatto referred to the suspect’s 1970s TV news interview that was featured in the documentary. “It sure looked like him … I would say, yes, that was him.”

‘Could have been’
A dozen other witnesses in Astoria and Corvallis, some interviewed for the History documentary, acknowledge they also received gifts and letters from the alleged confidence man. And they too noted similarities between old pictures and footage of Rackstraw and the man they knew as de Winter. But no photo of de Winter himself has been unearthed.

Colbert strongly objects to the FBI’s decision to shelve the D.B. Cooper file. He is offended that the agency — which will now only accept non-circumstantial evidence, such as the stolen money or parachute — is discounting eyewitness testimony and the work of his investigators. Colbert noted that twelve members of his forty-member team are retired special agents.

Rackstraw, a former U.S. Army officer, award-winning pilot, explosives expert and experienced paratrooper, has repeatedly denied he is the infamous skyjacker. But, thirty-seven years ago, when an NBC News reporter asked him whether he is Cooper, Rackstraw smirked and said, “I’m afraid of heights,” before adding: “Could have been, could have been. I can’t commit myself on something like that.” 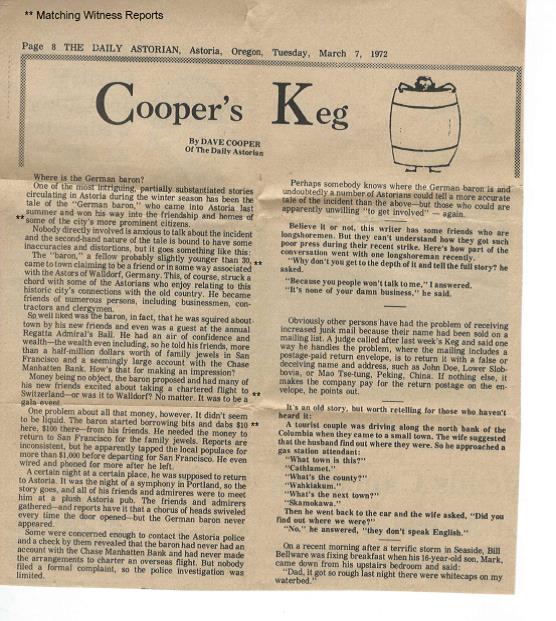 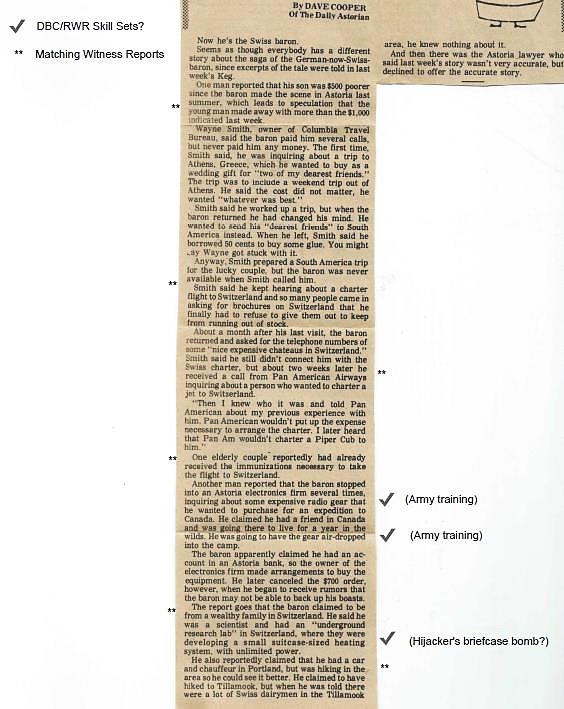