A new theory about what happened to the mysterious D.B. Cooper has gained attention and perhaps some credence in recent weeks, as two retired senior agents have given the nod to most of the premise.

Police trainer and author Tom Colbert, working with a cold-case team comprised of former federal and local law enforcement, has long suspected the daredevil not only escaped but is alive and well today, living in Southern California.

Dorwin Schreuder, the agent in charge on the Columbia River’s Tena Bar when Cooper cash was discovered there in 1980, agreed that Colbert’s 73-year-old target, Robert W. Rackstraw Sr., is the best suspect yet.

“Rackstraw absolutely fits the profile,” Schreuder told SeattlePI. He was a Vietnam veteran with parachute training, and Schreuder said his links to other thefts and his purportedly sociopathic behavior make him a likely suspect.

Colbert first shared the new escape theory with the more senior agent on the river incident. Bill Baker, a former FBI assistant director who at that time was Schreuder’s superior, sounded equally convinced, according to Colbert.

In a recent video interview, Baker stated, “Look, this is more than a theory. [Rackstraw] has all the attributes of someone to do this successfully. These are issues that have to be examined and weighed” by the Bureau. “I’m all for that.”

The two lawmen have joined twelve other former FBI agents who have provided testimonials, consultations or services to Colbert’s six-and-a-half year investigation.

The mystery began on Nov. 24, 1971, when a man calling himself Dan Cooper bought a one-way ticket on Northwest Airlines from Portland to Seattle. Once aboard the 727, he slipped a note to the flight attendant, saying he had a bomb and he wanted $200,000 and four parachutes, as well as a refueling truck ready when they landed in Seattle.

In Seattle, the man exchanged the passengers for the ransom and the plane took off for Mexico. But somewhere over Washington, Cooper jumped out the rear stair door and was never heard from again. The only evidence ever found was the small cache of $20 bills along the Columbia. The FBI officially stopped pursuing the case last year, but said it would review any physical evidence of the parachutes or the money that turned up.

Schreuder applauded Colbert’s efforts at investigating Rackstraw, who was a Bureau subject of interest in 1978-79 but was cleared.

A story tip Colbert received in 2011 led him to believe Rackstraw had outfoxed the FBI, something he has documented with co-author Tom Szollosi in their award-winning book, “The Last Master Outlaw.”

The hijacker’s secret getaway tale was allegedly revealed last February by a recreational pilot named Russ Cooper (last name a coincidence), at the prodding of his wife, a retired cop. Many of Russ’s escape details and time line appear to match ’71 FBI field interviews with eyewitnesses, recently released to Colbert through a judge’s FOIA court order.

Russ and three others were told the story at a Vancouver, Washington, flying club in 1997 by a Korean War veteran known as Wally. The 62-year-old Russ, now the last one alive, said it went as follows:

“On Nov. 24, 1971, a pilot’s small Cessna was circling after 8 p.m. when the slow-moving Northwest airliner broke through the storm clouds and rain. Minutes later, the pilot spotted a truck’s blinking headlights below, a signal that the jumper (Cooper) had touched down and rendezvoused with two other partners.

All their practiced air-to-ground coordination paid off; the skyjacker missed the selected drop zone by only 1,300 feet. The flyer swooped his two-seater aircraft toward nearby Goheen Airstrip to await the arrival of the vehicle and Cooper.

When the three men pulled up to the idling Cessna, the hijacker crawled inside with his briefcase bomb and $50,000 of the jet ransom. The remaining $150,000 and parachute were driven away by the two others to be buried.

Flying “below the radar,” the pilot and Cooper followed three rivers to Vancouver Lake, where the alleged $50,000 and briefcase bomb were unceremoniously dumped – with the hopes, Wally explained, that it would lead authorities to think Cooper had drowned.

The money and briefcase instead sank into the lake’s notorious deep mud – which happens to be right next to the Columbia River’s Tena Bar.

The pilot and daredevil then flew to Oregon’s Scappoose Airstrip in Oregon, where they transferred everything into another small plane. Storyteller Wally noted this was when Cooper changed out of his business suit.

The pair then headed to the scene of the original crime, Portland International, where the two men parted ways.”

Colbert thinks the surface cash found at Tena Bar in 1980, just a mile from Vancouver Lake, was Rackstraw’s second attempt to make it look like he (Cooper) drowned. Old article quotes show that’s what FBI agents surmised, including Schreuder himself.

According to Colbert, Rackstraw had teamed up with a drug-smuggling cohort to plant the three bundles, still separated by crumbling ’71 bank rubber bands. Then days later, a couple in on the scheme set up their young son to “find” them while making a fire.

FBI agents that fanned out on the shoreline discovered more of Cooper’s ransom, but this time the twenty-dollar bills were all broken up into hundreds of bits and pieces, one-to-three feet down in a sand layer. Facing live news cameras, Schreuder speculated the cash “shards,” most “about the size of a dime,” had been in the ground for “four or five, six years.” But to this day, the Bureau hasn’t offered any explanation as to how the chopped-up money got down there. 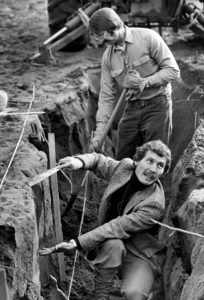 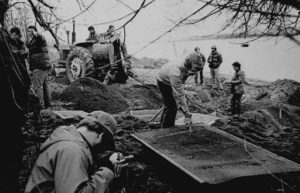 Colbert’s theory is that the ’71 plane-dumped cash in Vancouver Lake, which spills out into the Columbia, eventually made its way to Tena Bar in a tidal or high-water floodplain deposit – through a boat dredging accidentally or by Cooper-Rackstraw intentionally. (For details on one relevant dredging in 1976, see pages 5-7 at the above “Research” menu.)

The sleuth said he confirmed a seven-year crime partnership between Rackstraw and the Portland drug smuggler, Dick Briggs, now dead. The verification came from multiple witnesses and Rackstraw himself, in a face-to-face San Diego meeting with Colbert in 2013 (featured in “The Last Master Outlaw”).

“I have six people in four states that gave me the 1980 (money-plant) story,” said Colbert. “Rackstraw is the only Cooper candidate who told the FBI and others he was in Washington State at the time of the hijacking. That’s why my gut says he’s behind all this.”

The cold case team also located a couple in Astoria that adamantly claims Rackstraw, under an alias, had worked aboard their dredging boat on the Skagit River in Mount Vernon, Washington, just weeks before the hijacking.

Still, Schreuder wondered about tossing the money out of the plane in hopes someone would find it. The $50,000 dollars, after all, accounted for a large chunk of the $200,000 ransom.

“Would a guy like that throw away a quarter of his money?” Schreuder asked.

Wally’s escape tale also included very specific directions to a mountain location where the rest of the cash and parachute were allegedly buried. Last month, tipster Russ and his wife took Colbert’s nine-member forensic team there. The crew dug up five unidentified fabrics which were later turned over to the FBI, along with the dig site itself.

In their research, the private investigators stumbled across the names of two living Korean War vets that were very close to the deceased Wally. Colbert suspects all three made up the crew that assisted Cooper-Rackstraw in the getaway and burial plot. After forwarding their names and contacts to the FBI’s Seattle Division, Colbert said he received a thank you from a senior agent.

He hopes the Bureau will see fit to follow up on what the team believes is a solid lead in the 46-year-old case. “We truly feel that we now have the official escape story,” Colbert said.