A letter newly released from the FBI’s archives may prove that D.B. Cooper – the 1971 hijacker last seen leaping out of a plane with a fortune in cash – survived his stormy jump. The note, which was sent 17 days after the hijacking, appears to contain guarded information that was not released into the public domain until 13 years later.

If that’s the case, it might reveal not only that Cooper lived to tell the tale of his extraordinary heist, but that FBI agents covered it up to hide their embarrassment at his escape, the leader of a team of private investigators told DailyMail.com.

The hijacking occurred on November 24, 1971, when a man calling himself Dan Cooper boarded a Boeing 727 at Portland Airport and announced shortly after takeoff that he was holding a briefcase bomb.

The plane was grounded at Seattle-Tacoma Airport until authorities produced $200,000 in cash – the equivalent of $1,213,226 today – and Cooper released the passengers. But he kept some of the crew on board and forced them to take off before opening up the back of the plane and parachuting out over the forests of Washington, clutching the money and clad only in a suit.

For decades, the FBI openly speculated that Cooper died of exposure or drowned in a river, and last year they closed the case.

But a team of 40 private investigators, led by documentarian and author Thomas J. Colbert and his wife Dawna, believe that Cooper is alive – and told DailyMail.com they have the evidence to prove it. 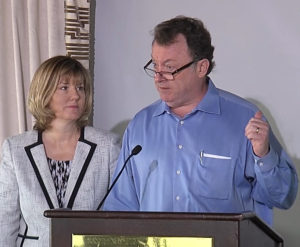 The couple successfully sued the Bureau and have obtained reams of previously undisclosed details about the case, including a series of five letters purportedly written by Cooper to the authorities.

Four of them were already known to the public, but now a fifth 1971 note has been produced which Colbert says proves the existence of an FBI cover-up. Copies of the typewritten letter were sent to The Seattle Times, The New York Times, The LA Times and The Washington Post.

It begins “I knew from the start that I wouldn’t be caught,” and goes on to explain exactly why the police will never catch him. Among those reasons is that “I left no fingerprints.”

For Colbert, who obtained the note in his most recent Freedom of Information Act (FOIA) package, that admission was an eye-opener. “The lack of prints was the biggest secret of the whole investigation, not revealed until two FBI agents wrote books in 1984 and 1991 and discreetly mentioned it,” Colbert explains.

“‘No fingerprints of value’ were recovered from anywhere Cooper was in the aircraft, including on his drinking cup. The only man outside the Bureau to know that would be the skyjacker. And, I might add, none were found on this fifth DBC letter or the earlier four. It’s highly unlikely we have two separate Coopers with the same meticulous habit.”

The letter also ends “Thank you for your attention” – a phrase similar to the “Thank you” message that conclude the first two notes.

That constituted a “thought pattern,” indicating that the letters were likely all written by the same man, according to retired FBI Special Agent Dorwin ‘Dory’ Schreuder, who worked the Cooper case in the 1980s and is now on Colbert’s team. 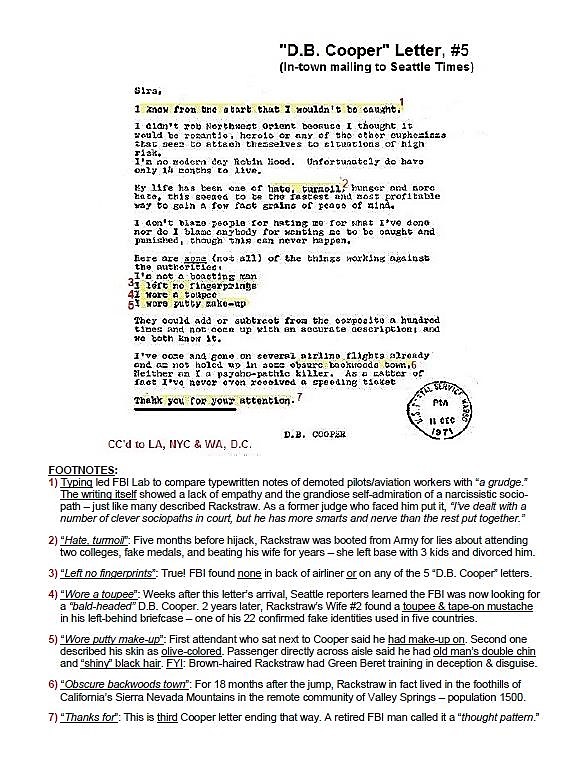 Were these clues? The FBI seemed to think so, Colbert said, as it immediately went to all four of the papers the new letter was sent to and retrieved their copies before burying them in their files.

The scan of the note provided to Colbert also has a Bureau “EVIDENCE” stamp – unlike its predecessors, which suggests authorities were taking this one more seriously.

According to old newspapers, the FBI also began to look for a bald man for the first time after the letter was sent, matching its claim that Cooper “wore a toupee.”

Descriptions of Cooper by those who saw him in the plane also suggest that he may have indeed been wearing a wig and putty – or at least makeup – as a disguise.

And yet, said Colbert, the 46-year-old letter was never made public knowledge beyond a couple of brief reports in the newspapers that played it off as a prank.

He said the FBI continues to try to hide its importance, even in the current monthly FOIA document dumps. Among the last batch, Colbert spotted seven “D.B. Cooper” references to the note completely redacted (Sample below). The majority were in one old memo — from the office of the former director and founder, J. Edgar Hoover. 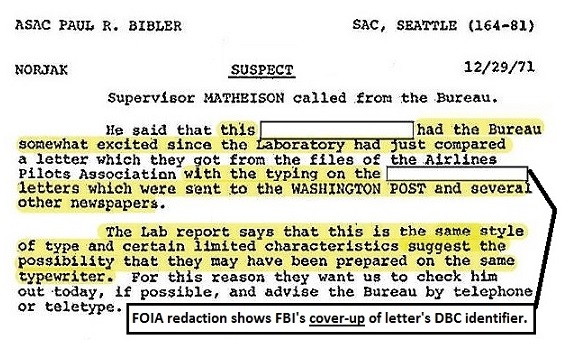 Colbert added that the other four letters, though officially “discounted” by the FBI, were in fact taken very seriously at the time. Records show Hoover himself was keeping tabs on the search for the author. He even had the printing on their envelopes, along with the only letter that was handwritten, compared with the printing of the infamous Zodiac Killer (who, thankfully, was not a match).

Colbert said that he and Dawna hired two forensics experts – one a past president of the American Society of Questioned Document Examiners, the other an esteemed ex-FBI agent – to examine the one handwritten note.

That handwriting is so similar to the printing on Cooper’s boarding pass, the two specialists said, that it was “likely” they “were written by one person.” But when the results and experts were offered to the FBI, they had no response, Colbert said.

Colbert also feels that the FBI has been too hasty to wrap up the investigation, and has been unduly reluctant to reopen it.

In August, his team found what they believe to be a parachute strap and foam padding from a skydiver’s backpack in remote forests near Cooper’s alleged jump location. They turned over the two items, along with the dig site itself, to the FBI. In addition, Colbert said two potential escape partners – both still alive – were identified during the research. The contacts for those men were likewise delivered to the feds.

But after three months of silence, the team’s renowned Washington, D.C., attorney, Mark Zaid, believes the FBI hasn’t taken action on any of the team’s efforts. He recently wrote current Director Christopher J. Wray, stating “the Bureau has failed to live up to its’ Mission and has seemingly ignored crucial new evidence that could solve the case.” Then he gave Wray a week to give a status report, which resulted in crickets.

Colbert’s gumshoes are now preparing to go back to the digging area, again without federal help.

When contacted, a spokesperson for the FBI’s Seattle Office, Ayn S Dietrich-Williams,  said: “It would be inappropriate to comment on any specific tips provided to us in this case, however our continued posture is to review any physical items provided and pursue follow-up actions, as appropriate.”

Dietrich-Williams declined to answer any further questions about the suspected strap or dig site.

If Cooper is alive, how did he escape exposure in the wild – and where is he now?

Colbert has dug up contemporary newspaper reports, eyewitness accounts and court-ordered FBI field notes that suggest other men were seen in a small plane at another airfield, around the time of the hijacking. He believes they were the ones that picked up Cooper after he landed, then flew under the radar to drop him off safely so that he could make his getaway.

That story, he says, matches a claim made by a man at a pilot’s club at the now-closed Evergreen Field in Vancouver, Washington, who said in 1997 he heard the secret details of the getaway flight from an older flyer. That flyer is now believed by Colbert to have been one of Cooper’s former escape partners.

And what of Cooper himself? Colbert suspects he is a Vietnam veteran named Robert W. Rackstraw Sr., now 74. Rackstraw had an illustrious military career, being a pilot in the 1st Cavalry Division, one of the first major American air assault divisions. It was there that Rackstraw learned to parachute, and was given two Distinguished Flying Crosses and a Silver Star for his performance while in the air. But he was kicked out of the Army after they discovered he was a high-school dropout and had lied about attending two colleges.

Colbert believes the military gave him all the skills he needed to pull off the extraordinary heist.

The sleuth also noted that the first and fourth letters sent by “Cooper” in 1971 were sent from mailboxes in Sacramento and Oakdale, California, both less than a half-hour drive from Rackstraw’s remote home in the foothills of the Sierra Nevada Mountains. 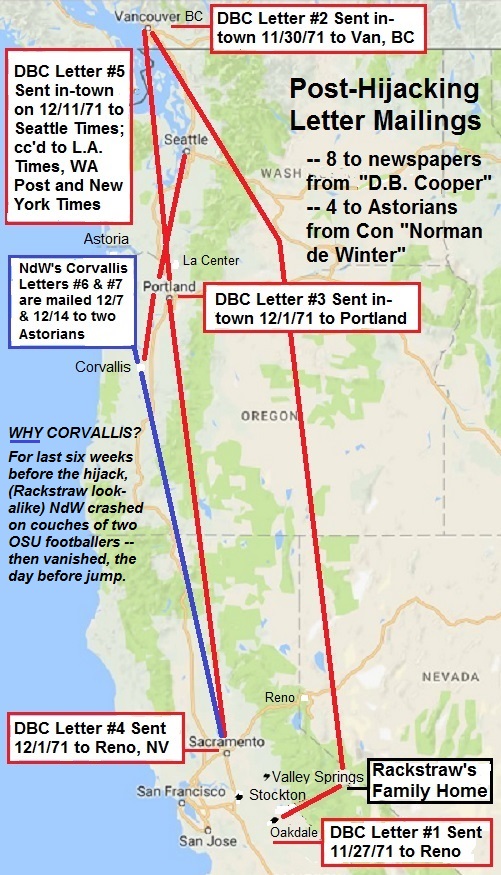 ​In 1977, six years after the hijacking, Rackstraw was suspected of kiting checks for $75,000. But he fled before arrest and went to Iran to teach the Shah’s men how to fly American-made helicopters. Meanwhile, back at home, police raided his storage units and found 14 rifles and 150 lbs of dynamite.

The FBI arranged for him to “lose” that Iran chopper job in February 1978. G-men then escorted him back the USA where he was arrested for bank fraud, hording explosives and the murder of his stepfather. Philip Rackstraw was found in the grounds of his remote property with two bullets in his head.

But Rackstraw was acquitted of murder in July and made bail on the other charges. Then just before those trials were set to begin in October, he faked his death, pretending to crash his plane in the Pacific Ocean off Monterey Bay, California. The fugitive was found in Southern California in January 1979, living under a phony name – one of his 22 documented fake identities – and taken in by the FBI again, who now believed he might be Cooper.

But the lack of direct evidence and the sudden “discovery” of some of the hijack money in Washington State – planted along a river, Colbert says, by an long-time accomplice – led to Rackstraw’s clearing in the skyjacking case. He only served a year in prison for his local convictions, and he moved to Riverside, California.

There he taught a law course in mediation at UC Riverside, becoming head of its law department for two of his ten years before retiring to San Diego and to his yacht, ‘Poverty Sucks’.

Is Rackstraw the greatest air criminal in American history? After the investigation went public in July of 2016, on of his lawyers from the 1970’s called the claims ‘the stupidest thing I ever heard.’

Attempts to reach the attorney again for this story were unsuccessful. Colbert said he’s documented twelve Rackstraw postings online over the last year, desperately seeking new representation. So far, no legal eagle has pulled that ripcord.