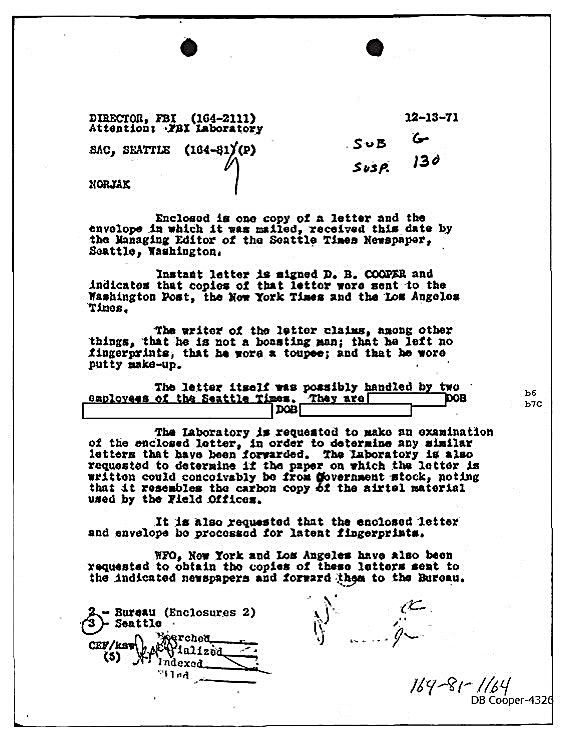 It’s the case that won’t go away.

The only unsolved skyjacking in U.S. history remains unsolved. But a small army of private investigators is confident they have identified the culprit, his co-conspirators, and new evidence that many believe was covered up by the FBI for decades.

The 40-member cold case team, led by filmmaker and author Tom Colbert, has been hot on the Cooper caper for a half-dozen years. And after a recent suit to obtain public records, the team got its hands on a startling letter from the alleged daredevil, the fifth in a series of taunting notes sent to newspapers in the weeks after the incident.

The released letter — copies of which were originally mailed to The Seattle Times, the Los Angeles Times, The Washington Post and the New York Times — and FBI memos about it reveal that it was considered a serious clue by the Bureau, and agents believed the skydiver was still alive. Upon study, Colbert’s team feels certain facts in it could have only been known by Cooper himself.

“I knew from the start that I wouldn’t be caught,” the letter begins.

Several things highlighted by the writer — a lack of fingerprints on the jet, suspicion of Cooper wearing a hairpiece and possibly makeup and more — were evidentiary puzzles during the ordeal that weren’t publicly released at the time, Colbert said. Add on that two of these five Cooper letters were mailed from near a remote mountain home of a former NORJAK “person of interest,” and things point squarely toward the team’s theory.

Colbert’s retired law enforcement officials, forensic experts and more than a dozen FBI agents have previously identified Robert W. Rackstraw Sr., a 74-year-old Vietnam veteran now living in San Diego, as their focus. He was a hijacking suspect in the late 1970s, but formal charges were never pursued.

Reached by phone on Wednesday, Rackstraw had little to say about the allegations, other than to suggest the reporter verify Colbert’s claims.

The four earlier Cooper letters, mailed to newspapers from several states, were also quickly collected by field agents. But this rediscovered fifth note, the only one typed and stamped “evidence,” was kept away from visiting researchers and authors, let along the media, for 46 years. To Colbert, that suggests the FBI worked to hide the evidence of the getaway for decades.

“And it continues to this day,” said the team organizer.

One member of Colbert’s team, a former FBI special agent named Ron Hilley, wasn’t ready to call the letter and other actions a cover-up, but said he believes the Bureau simply wasn’t ready to expend more resources on a case that old.

Mystery from the beginning

It all began on Nov. 24, 1971, when a man calling himself Dan Cooper bought a one-way ticket on Northwest Orient Airlines from Portland to Seattle. Once aboard the Boeing 727, he slipped a note to the flight attendant saying he had a bomb and that he wanted $200,000 and four parachutes, as well as a refueling truck ready when they landed in Seattle.

In Seattle, the man exchanged the passengers for the ransom money and the plane took off, headed for Mexico. Somewhere over southwest Washington, Cooper jumped out the rear stair door of the plane and was never seen again.

The only verifiable evidence ever found was a small cache of $20 Cooper bills found near the Columbia River in 1980.

The FBI officially stopped pursuing the case in 2016, but said it would review any physical evidence of the parachutes or the money that turned up. It remains the only unsolved case of air piracy in the U.S.

Colbert and his team aren’t the only ones of course who have pursued the case independent of the FBI. But he and his group’s work was featured in a 2016 History Channel special, and that has drawn the most attention in recent years.

Last August, Colbert and a half-dozen forensic members headed to a digging site on private property in the Cascades (he isn’t releasing the location), following leads from a second-hand story that came to the team about Cooper’s secret getaway.

The escape tale’s details re-enforced Colbert’s belief that Rackstraw was the likely suspect, something he documented in the award-winning book, “The Last Master Outlaw,” and on the website he and his wife Dawna run together, DBCooper.com.

While digging in the remote mountain location, the team found bits of a strap and foam that they think were part of Cooper’s parachute and backpack.

Colbert said the evidence falls within the parameters of what the FBI said it would review, so last summer, he turned in a total of five unknown materials. He was told agents would be following up with the lab work, the dig site itself and two potential Cooper co-conspirators the team uncovered through research.

The Bureau wouldn’t comment on whether it’s taking any new action in the Cooper case, but it did reiterate its earlier commitment to review any physical or direct evidence brought forward.

The thing is, the FBI doesn’t seem to have made any moves at all.

“We gave them recovered materials, a credible dig site and two possible suspects,” Colbert said. “That was three months ago.”

Colbert claims this inaction isn’t an anomaly. He’s compiled a list of a dozen incidents that imply a larger evidentiary cover-up, including the following:

-A 12/29/71 memo from an “excited” senior agent spoke of the valued fifth letter. But just before the memo’s court-ordered release, the Bureau redacted the “D.B. Cooper” identifier in front of the word “letter.” It is one of seven references received by Colbert with the note’s hijacker connection cut out;

-The FBI was forwarded personal stories and newspaper articles about a Swiss con artist that lived in two Oregon towns for several months, then vanished from a roommate’s couch the day before the hijacking. More than a dozen residents that recently viewed old news video and pictures of paratrooper Rackstraw adamantly believe he was their grifter. But the Bureau hasn’t approached witnesses in either town;

-Old FBI field notes show agents interviewed more than a half-dozen farmers in La Center, Washington, who claimed to have seen a small-plane pilot and two men in a truck on their remote fields, conducting nighttime take-offs and rendezvous in the rain — the day-before and day-of the hijacking. An out-of-town reporter talked to the same farmers after the FBI, and the storyteller who brought the team the getaway tale told of the same touch-and-go details and timetable. But when Colbert forwarded an escape summary last August that featured all three of these intertwining accounts, the FBI took no action;

-The college student who sat right across from Cooper was responsible for providing the description for the most accurate FBI “Sketch B.” In the ensuing years, agents brought him hundreds of mugshots, but he rejected all of them. However, when Colbert tracked down the former passenger for a professional “six-pack” mugshot test on 9/21/15, he quickly picked Rackstraw out of a half-dozen photos. When the video-taped conclusion was shown to former FBI Assistant Director Tom Fuentes, an FBI liaison hired by History Channel, he only described the result as “questionable at best.”

Colbert and his most senior investigators believe the FBI is trying to avoid being “shamed in court” by the team’s piecing together of the nearly five-decade-old case.

“We knew this would be embarrassing for them,” noted the organizer, “and that’s why my wife and I worked hard to find a couple-dozen retired feds for the FBI to be comfortable with. All that we asked was, if they made an arrest, to thank the old G-men on press-conference day. But (case agent) Curtis Eng rejected this face-to-face offer and all of the team’s amazing evidence. It’s more than a year later, but it’s still very sad for us.”

Meanwhile, team member Ron Hilley still isn’t convinced Seattle Division is trying to cover things up. “The FBI holds everything they have tighter than you’ve held anything in your life,” Hilley said. “My belief is that the FBI has closed the case…and they’re just not going to go back and do anything else.”

But the career-polygrapher thinks the evidence assembled by their team will be rock solid once someone — the FBI or Colbert’s team — fully digs up the remote site and finds the rest of a parachute that can be proven to be Cooper’s.

While another member suggested Colbert may have gotten too focused on Rackstraw and so has found connections he wants to find to support his theory, Hilley saw it the other way around.

“When you get the right person…every piece of evidence will point at them because they did it,” Hilley said. “If you look at the entire investigation that Tom’s team has put in the book, there’s no way in hell that you could say it’s not (Rackstraw).”