Just days after a piece of fabric — thought to be from a parachute used by the mysterious hijacker D.B. Cooper — was found in the Northwest, another piece of evidence appears to have emerged.

A team of investigators, coordinated by law enforcement trainer and author Tom Colbert, dug up two sections of foam which they think may have been part of a parachute backpack used by the jumper when he leapt from a 1971 airliner with $200,000 in ransom money.

Colbert told SeattlePI the new find was handed over days ago to the FBI at its resident agency office in Bend, Oregon. As to how much closer the new evidence puts the case, Colbert said that’s up to the FBI, but he and his team are feeling optimistic about it.

“The odds of finding [both materials] in a forest that had no homes for ten miles in any direction, back in 1971, is a really good sign to us,” Colbert said.

The mystery began on November 24 of that year, when a man calling himself Dan Cooper bought a one-way ticket on Northwest Orient Airlines from Portland, Oregon to Seattle. Once aboard the Boeing 727, he slipped a note to the flight attendant saying he had a bomb and that he wanted $200,000 and four parachutes, as well as a refueling truck ready when they landed in Seattle.

In Seattle, Cooper exchanged the passengers for the ransom money and chutes, then the plane took off, headed for Mexico. Somewhere over Southwest Washington, he jumped out the rear stair door of the plane and was never heard from again. The only verifiable evidence ever found was a small cache of $20 bills found near the Columbia River in 1980.

The FBI officially stopped pursuing the case last year, but said it would review any physical evidence of the parachutes or the money that turned up. It remains the only unsolved case of air piracy in the U.S.

The first piece of material — thought now to be part of a “pin-cover flap” from the back of Cooper’s parachute — and the foam fall firmly in the category of what the FBI said it will review, Colbert said. While the Seattle Division previously said it wouldn’t confirm or deny information about the investigation, Colbert said an agent there recently emailed to acknowledge the Bend materials had been forwarded.

All the samples were located on a 200-acre mountain tree farm, in a 20-yard by 100-yard strip of land that corresponds to an elaborate escape story which Colbert’s team was tipped to. The tale originally came from an old veteran, now believed to have been one of Cooper’s escape partners, who told it to a table of recreational pilots in 1997. The last person alive at that table came to Colbert with all the alleged details — from jump to burial — last April.

Colbert and his wife Dawna, who operate DBCooper.com, put together a 40-member cold-case team six years ago that includes more than a dozen former FBI agents. Their investigation has led them to believe the real D.B. Cooper is a man named Robert W. Rackstraw Sr., a 73-year-old Vietnam veteran now living in San Diego. Rackstraw was a suspect for the hijacking in the late 1970s, but formal charges were never pursued.

The escape story Colbert heard led him to firmly believe that Rackstraw is the most likely suspect, something Colbert documented in the book “The Last Master Outlaw.”

This synopsis of the getaway, relayed by 62-year-old Russ Cooper (Last name just an odd coincidence), came from a veteran named Wally:

“On Nov. 24, 1971, the pilot’s small Cessna was circling after 8 pm when the slow-moving Northwest airliner broke through the storm clouds and rain. Minutes later, the pilot spotted a truck’s blinking headlights below, a signal that the daredevil had already touched down and rendezvoused with two other partners. All their practiced air-to-ground coordination paid off; the jumper missed the selected drop zone by only 1300 feet.

The flyer then swooped his two-seater aircraft toward nearby Goheen Airstrip to await the arrival of the vehicle and Cooper. When the three men pulled up to the idling Cessna, the hijacker crawled inside with his briefcase bomb and $50,000 of the jet ransom. The remaining $150,000 and parachute were driven away by the two others to be buried. 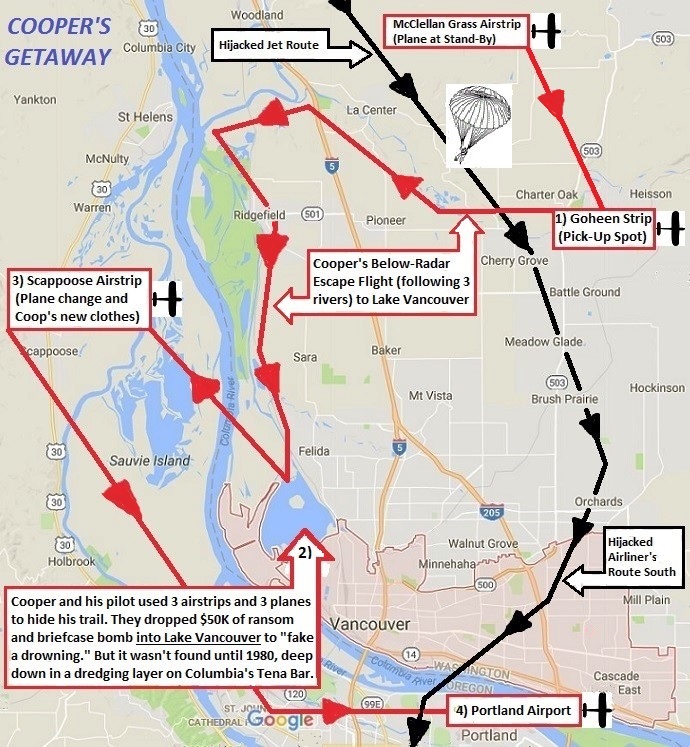 Flying ‘below the radar,’ the pilot and Cooper followed three rivers to Vancouver Lake where the alleged $50,000 and briefcase bomb were unceremoniously dumped – with the hopes, Wally explained, that it would lead authorities to think Cooper had drowned.

​(Colbert believes the money and briefcase instead sank into the lake’s deep mud, which happens to be next door to the Columbia River’s Tena Bar. He now suspects the hijack cash that was ‘discovered’ there in 1980 was Cooper’s second attempt at a drowning stunt.)

The pilot and skyjacker then flew to Oregon’s Scappoose Airstrip where they transferred everything into another small plane. Storyteller Wally noted this was when Cooper changed out of his business suit.

The pair’s last landing was at the hijack’s starting point, Portland International Airport, where the two parted ways at a terminal.”

Colbert said his team has since handed the dig site over to the FBI. But before they spend time and resources there, he feels the special agents are more likely going to knock on the doors of two living vets who may have been involved in Cooper’s high-flying caper.