A team of volunteer investigators may have found the location of the lost cash stolen by one of the 20th century’s most compelling criminal masterminds.

Once the money was transferred onto the plane, he had the crew take off – then he parachuted out over the Pacific Northwest woods and disappeared. Just a few packs of money were ever found, but nobody had any idea where the rest of his fortune went.

Now a 40-member cold case team, organized by law enforcement trainer and author Thomas J. Colbert and his wife, Dawna, say they have found what some believe could be a parachute strap or flap from the heist. Importantly, Thomas Colbert said, the material was located “right where two credible sources believe the chute and remaining money are buried.”

Colbert isn’t revealing the find’s location, but says he plans to send the possible evidence to the FBI for analysis. He also states he will soon turn over the whole dig site to the Bureau. 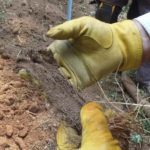 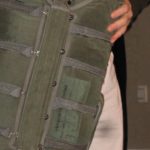 The Colberts said the “sources,” Russ and Kristy Cooper (name just an odd coincidence), had studied county records for months and documented the purported escape path, ending at a remote mountain. Kristy is a retired senior administrator for a county sheriff and a former reserve officer. Both volunteer time each week on a police-civilian review board.

Parts of the couple’s getaway route are reportedly corroborated by 1971 agents in old FBI memos and field-report records — records the Colberts and team lawyer, Mark Zaid, sued for last year after the Bureau announced they would no longer be investigating the case.

Their team of gumshoes, spearheaded by former FBI agents, spent six years investigating and collecting more than one-hundred pieces of evidence on the mysterious crime. Tom Colbert co-wrote an award-winning book, The Last Master Outlaw, and exec-produced a documentary series on it in the process.

In July of 2016, the Colberts publicly announced that they adamantly believed Cooper’s real identity is Vietnam veteran Robert W. Rackstraw Sr., a highly-decorated pilot, explosives expert and four-time felon who fled the country and faked his death in 1978, all to avoid a series of local trials.

The ex-con, now a retired 73-year-old college instructor with a yacht named ‘Poverty Sucks’ in San Diego, has denied the Colberts’ Cooper claim.

*For more on Russ and Kristy’s journey, go to the second and third page in RESEARCH.