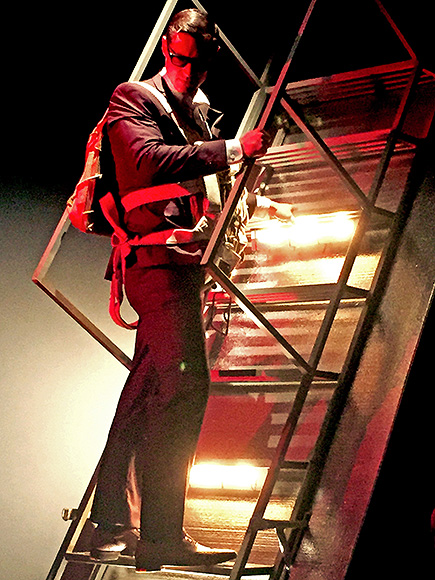 Over the past four and a half decades, the so-called D.B. Cooper skyjacking case has captivated countless armchair detectives – not to mention teams of FBI investigators – hoping to finally crack the nation’s only unsolved act of air piracy.

Now a California man, who has assembled a team of investigators, thinks he may have finally solved case, which will be detailed in the two-part History Channel special D.B. Cooper: Case Closed? that airs on Sunday and Monday.

“In my 35 years I’ve never seen as much evidence on any case I’ve worked on,” says Tom Colbert, a former research director for LA’s local CBS affiliate who assembled a team of retired investigators [including a dozen former FBI agents] to re-examine the case for nearly five years. “I’m absolutely certain in my mind that we’ve got him. It’s just a matter of time before he has to admit it.”

The identity of the alleged culprit, who is confronted by Colbert’s investigators at one point during the upcoming docu-drama with cameras rolling, will be revealed during the program.

The man who became known as D.B. Cooper first made headlines in November 1971 after he boarded a commercial flight in Portland and told a stewardess that he had a briefcase filled with dynamite.

The plane was bound for Seattle and by the time it landed the authorities had delivered the $200,000 in cash he requested, along with four parachutes.

He ordered the pilot to fly him to Mexico, but somewhere near the Washington-Oregon border he strapped on a parachute and leaped from the jet into a rainstorm, never to be seen again – although $5,800 of the money was discovered by an 8-year-old boy on the edge of the Columbia River nine years later.

The FBI, who did not respond to PEOPLE’s request for a comment on the case, has long maintained that Cooper probably didn’t survive the risky nighttime jump. Over the years, their case files have grown to more than 60 volumes.

• Want to keep up with the latest crime coverage? “Click to get breaking crime news, ongoing trial coverage and details of intriguing unsolved cases in the True Crime Newsletter.

“The D.B. Cooper case is a mystery like any case where you don’t get resolution, but there has to be an answer,” Ron Hilley, who spent 24 years as an FBI agent and served as a member of the investigative team that re-examined the case, tells PEOPLE.

“He [the man they name as the culprit] looks like an extremely viable suspect to me. I would love to see the explanation that clears him.”