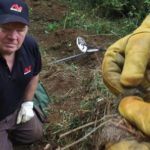 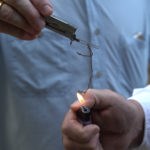 Retired FBI agent studies vet-jumper’s find. Forensic scientist directs a burn test, but the piece doesn’t light or drip. To team, that suggests it is fire retardant — like a military parachute.

Physical evidence that may be connected to the unsolved 1971 D.B. Cooper hijacking case is now in the hands of FBI agents in California.

The “evidence” — a frayed, 18-inch-long piece of fabric that may have come from the parachute D.B. Cooper used when he escaped from a plane with $200,000 — was found in a mound of dirt in the deep Pacific Northwest mountains nearly two weeks ago. It was turned in Friday to the FBI’s Ventura, California office by acclaimed D.B. Cooper sleuth Tom Colbert, a Los Angeles law enforcement trainer and author.

“Well, after six years of gathering information with a 40-member cold case team, I’m ecstatic they are considering this,” Colbert told Fox News during an interview Sunday, referring to the FBI.

Colbert is hoping the discovery of what some believe is a parachute strap or pin-cover flap will reignite interest in the case. The FBI announced last year that it would no longer actively investigate the D.B. Cooper case to focus on other investigative priorities.

The FBI confirmed meeting with Colbert.

“Any evidence brought to the FBI will be evaluated for its value,” FBI Los Angeles Office spokeswoman Laura Eimiller said in an email Sunday to Fox News. “This case falls under the purview of FBI Seattle so my understanding is it will be forwarded there.”

Ayn S. Dietrich-Williams in the FBI’s Seattle office told Fox News on Sunday “the FBI does not typically confirm or deny the routine activities we perform in the course of our investigative work.” She added, “However, I can reassure you that the FBI’s Seattle Field Office will review any physical items possibly related to the parachute or money taken by the NORJAK hijacker.”

In 1971, a man calling himself Dan Cooper, wearing a black tie and a suit, boarded a Seattle-bound Boeing 727 in Oregon and told a flight attendant he had a bomb in a briefcase. He gave her a note demanding ransom.

After the plane landed, he released the 36 passengers in exchange for $200,000 in ransom money and parachutes. The ransom was paid in $20 bills. The hijacker then ordered the plane to fly to Mexico, but near the Washington-Oregon border he jumped and was never seen or heard from again.

Colbert said his team, led by an retired FBI agent, found the fabric while digging in a spot where a credible source claimed the chute and remaining money are reportedly buried. FoxNews.com reported on the finding last week.

The organizer said a former law enforcement member on the dig compared the material to a parachute like the one the skyjumper used.

“She studied the samples and said the stitching pattern appears similar,” Colbert said, “but we’ll see what the lab experts have to say.”

After closing the case, the Bureau issued an advisory that should specific physical evidence emerge — related specifically to the parachutes or the money taken by the hijacker — individuals with those materials should contact their local FBI field office.

Colbert said that is why he went to the Ventura FBI office and met with a special agent there. “We sat down with him and went over the details of the chain of custody, from the dig member to me,” he said.

Colbert, who maintains a website, DBCooper.com, and his team of investigators believe D.B Cooper is Robert W. Rackstraw Sr., a 73-year-old Army veteran from San Diego with a prior criminal record.

Investigators questioned him about the D.B. Cooper case in 1978 and eliminated him as a suspect. Rackstraw has since repeatedly denied any involvement in the caper.

Colbert said that during the meeting with the FBI, he also gave the agent information about two men in their 80s, both veterans, whom he believes may have personal knowledge of the skyjacking, escape and burial.

He said he also revealed where the fabric was found. Colbert described the site as a mountain tree farm, but declined to be more specific.

On Saturday, he emailed the Ventura agent, stating his team was ready to turn the location over for further digging: “The site is yours.” 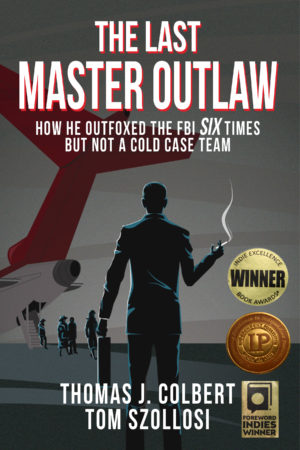