A team of stalwart investigators committed to solving a decades-old cold case think they have definitively identified the infamous skyjacker known as D.B. Cooper.

The mysterious air bandit took over a Boeing passenger plane in 1971 and jumped out on a parachute with a 200-thousand-dollar ransom, never to be seen again.

The FBI abandoned the case in 2016, citing a lack of credible leads.

But a court-released 1971 letter, believed to have been written by Cooper and sent to news outlets after the skyjacking, has led Colbert’s team back to a likely suspect — Vietnam War veteran Robert W. Rackstraw Sr., 74, who was cleared by the FBI in the late 1970s.

Colbert says the Bureau was outfoxed. His sleuths, led by retired FBI agents, have documented 22 identities that the four-time felon went on to use in five countries.

After getting FBI Headquarters’ written permission to relook at Rackstraw in 2012, Colbert’s team spend three years undercover, gathering more than 100 pieces of evidence, including DNA. But the week they were scheduled to turn it all in (April, 2016), Seattle agents refused to accept it or meet.

They claimed the Bureau had grown concerned about prosecuting a 46-year-old circumstantial case. With cameras rolling for a History Channel documentary, the agents told Colbert they’d consider reopening it for two things: the missing parachute and money.

The organizer redirected his volunteers, and last year, the team struck gold again. 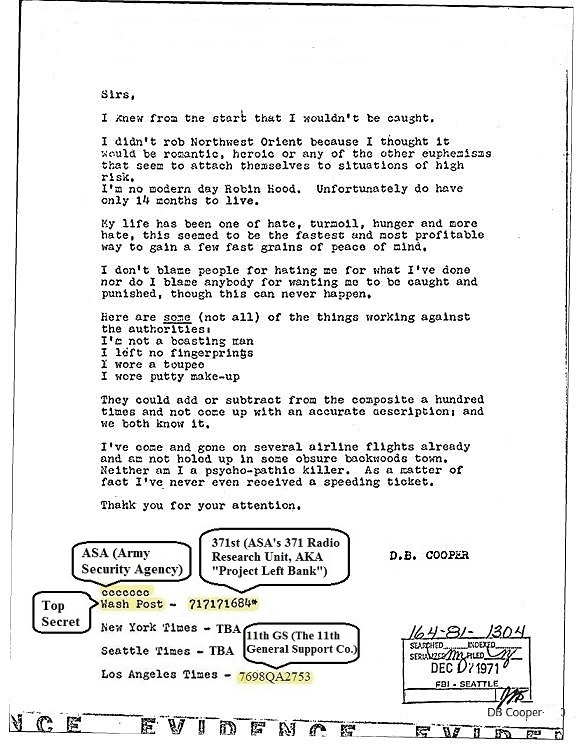 Through wife Dawna’s website DBCooper.com, sources brought the investigators the escape story; the dig location for the parachute and cash (with dug-up samples); and the names of two alleged Cooper partners that helped the skyjacker get away.

But now four months after delivering it all to the FBI, Colbert says the Bureau has done nothing.

“They’re not concerned about a circumstantial case,” said Colbert. “This is obviously all about being embarrassed by civilians, let alone retired FBI men.”

Colbert believes that the key to the case now lies in the Dec. 11, 1971 letter that his team’s lawyer, Washington, D.C.-based Mark Zaid, obtained in an ongoing Freedom of Information Act (FOIA) suit against the FBI and Department of Justice.

The typed note, copies of which were mailed to the New York Times, the Los Angeles Times, the Seattle Times and the Washington Post, contains peculiar strings of letters and numbers at the bottom of the page.

Rick Sherwood, a former member of the Army Security Agency (ASA) — which deciphered the enemy’s encrypted signals in Vietnam — and a member of Colbert’s team, has linked the codes to three “masked” Army units that Rackstraw was a part of during his Vietnam service (above). Two of them remained secret until the late 1980s.

“Since these correlate with identifiers in Rackstraw’s (Army) life, I’m convinced this letter was written by D.B. Cooper,” Schafer said. “This is your strongest evidence linking him to the hijacker.”

“This is it,” Colbert told the Daily News on Thursday.