By JAMES WILKINSON, FOR DAILYMAIL.COM; September 9, 2016

A filmmaker and his team of 40 experts sued the FBI Thursday in an attempt to prove that a loose cannon ex-army helicopter pilot is in fact legendary hijacker DB Cooper.

Cooper’s daring heist – which saw him parachuting out of a plane with the equivalent of $1.2million before vanishing – remains the only unsolved air piracy case in US history.

The complaint, filed Thursday in US District Court in Washington by producer Colbert, demands access to the Bureau’s 45 years of files on DB Cooper.  If he wins, Colbert and his team of 40 sleuths – who include former FBI agents, criminologists, journalists and attorneys – may finally have what they need to prove their suspicions are correct.

They say it was Rackstraw who stepped onto a Portland-Seattle flight on November 24, claiming to have a bomb, eventually exchanging the passengers for $200,000 and parachutes. And it was Rackstraw who ordered the crew to take off towards Mexico City, sent them into the front of the plane, and then opened the rear door and leaped out, clutching the money.

‘Dan Cooper’ – identified in the press as ‘DB Cooper,’ the name that stuck for the next 45 years – was never seen again after diving into 200mph winds at 10,000 feet. Nor was most of the money – although in 1979, $5,800 of it was found by a boy in the Washington woods that Cooper parachuted into. Whether the rest was lost to the elements is unknown.

It’s an extraordinary crime to be accused of – but Rackstraw is no stranger to the extraordinary. According to a History Channel documentary on the case, Rackstraw had an illustrious military career in Vietnam, being a pilot in the 1st Cavalry Division, one of the first major American air assault units. It was there that Rackstraw learned to parachute, and was given two Distinguished Flying Crosses for his performance while in the air.

But he was kicked out after making Lieutenant when the army learned he was a high-school dropout, not the college graduate he’d claimed to be.

That, Colbert claims, gave Rackstraw the necessary skills and the rebellious motive to hit back at authority in the most spectacular way.

But Rackstraw’s story doesn’t end there. Not by a long shot.

In early 1972, Rackstraw turned up in Stockton, California, where his sister lived, Recordnet.com reported.  His mom and stepdad lived around 40 miles away in Calaveras County.

Later in the decade, he appeared on the radar of the authorities after kiting checks to the sum of $75,000, and police issued a warrant for his arrest. So Rackstraw did the logical thing: He quickly moved to Iran, where there were no extradition treaties with the US, and taught the Shah’s soldiers how to fly helicopters.

He might have been baking in the Middle Eastern sun, but home was even hotter: Stockton cops raided Rackstraw’s storage units and found 14 rifles and 150 lbs of dynamite. And Calaveras police dug up the grounds of his parents’ home to find his stepdad buried in a shallow grave with two bullet holes in his head.

Rackstraw’s mom had died of natural causes, leaving him next in line to inherit the property once his stepdad died. And then Rackstraw’s luck ran out: In early 1978, he lost his Iran job and was forced to return to the US, where the FBI picked him up.

Acquitted for his stepdad’s murder, but pending a trial for the check-kiting, forgery and possession of explosives, Rackstraw made bail and once more took to the skies. The plane he hired from Stockton airport couldn’t make it to Iran – but that’s okay: it wasn’t intended to make it anywhere.

Flying over Monterey Bay, Rackstraw made a distress call, saying the engine was on fire and he was going down. The wreckage wasn’t found, but four months later, he was – 360 miles south in Fullerton, where he was caught trying to copy federal pilot licenses.

Cops saw through his dyed-red beard and repainted plane in a nearby hangar. They dragged him back to Stockton, where the FBI, intrigued by talk of plane heists and disguises, asked him if he was DB Cooper.

‘Could have been,’ Rackstraw taunted. ‘I can’t commit myself one way or another for something like that… like I say, primarily I’m afraid of heights…

‘There’s a matter there too – you say, “Well, with a story like that, should it be fiction or should it be fact?” And that’s primarily up to the American people.’

But the American people never got a chance to decide: With a lack of evidence, the FBI backed down from taking him to trial for hijacking. Plus, they had been distracted by the discovery of $5,800 of the stolen money by the Columbia River in Washington – money that Colbert says was planted there by an accomplice to distract the authorities.

Ultimately, Rackstraw made a plea deal and served a year in prison for some of his Stockton convictions.

He later moved to Riverside, where he went straight and worked for the city.  In fact, he went so straight that he later taught a law course in mediation at the University of California, Riverside.

And now he lives peacefully in San Diego, near his yacht, the ‘Poverty Sucks.’

Is Rackstraw the greatest air criminal in American history? Colbert says he is – and that the FBI files, if he can get them, will prove it.

But Rackstraw’s lawyer is less than impressed with the theory, calling it ‘the stupidest thing I ever heard.’ 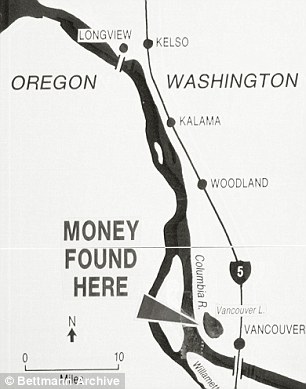 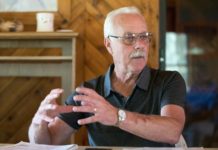 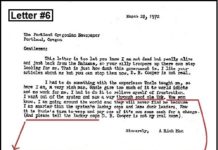