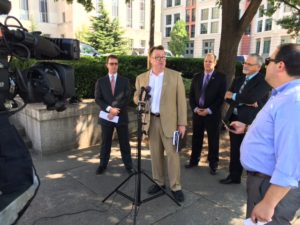 A team of self-styled “cold case” sleuths believes they have solved the 45-year-old mystery of D.B. Cooper, and on Thursday announced a federal lawsuit they claim could force the FBI to prove they are right.

On Nov. 24, 1971, a passenger who called himself Dan Cooper told a flight attendant on Northwest Orient Flight 305 from Portland to Seattle that he had a bomb in his briefcase. Once the plane landed, Cooper swapped the passengers for parachutes and a suitcase bearing $200,000 and demanded to be taken to Mexico. Minutes after takeoff, he jumped out of the plane and into oblivion, touching off decades of investigation, speculation and fascination.

“Dan Cooper, who was later erroneously identified by a reporter as “D.B. Cooper,” the name that has stuck for four decades, was never found dead or alive and the crime remains unresolved,” notes the complaint filed Thursday in U.S. District Court in Washington by Thomas Colbert, which seeks to obtain the FBI’s entire file on its investigation.

The FBI announced in July it was no longer actively investigating the case, but Colbert, a TV executive and law enforcement trainer, believes he and his team of 40 former FBI agents, criminologists, journalists and attorneys have figured out who Cooper was and what became of him.

Colbert’s team has zeroed in on San Diego resident Robert Rackstraw, who is alive and well at age 72, as the man who jumped out of a plane at 10,000 feet and into 200 mph winds in pitch darkness, taking with him a small fortune. The team named Rackstraw as the possible suspect on a two-part History Channel show in July. Rackstraw had been a person of interest in 1978, but was never charged by the FBI.

Rackstraw could not be reached for comment and the FBI declined to discuss the lawsuit.

Attorney Mark Zaid, who represents Colbert, said the cold case team has assembled an “overwhelming” 102 pieces of evidence, including DNA, forensic documents, letter trails, and interviews with former wives and a mistress that point to Rackstraw. Eighteen key pieces of evidence, Zaid claimed, were left out of the History Channel documentary.

“This guy’s background fits to a tee,” Zaid said. “It reads like a Tom Clancy or Robert Ludlum novel.”

The complaint lists several biographical elements and anecdotes allegedly regarding Rackstraw, who the cold case team believes pulled off the caper to “stick it to the man.”

“We are not only seeking the discoveries of the investigative files but we have laid out why we believe that Robert Rackstraw is the suspect,” Zaid said.

Theories about what became of Cooper have come and gone over the years, including alleged sightings and newly emerged clues. Many believe he died and his body was lost in the dense wilderness on the Washington-Oregon border.

The most tantalizing clue to surface was the 1980 discovery of $5,800 of the ransom money found buried along the Columbia River. No one knows if the money was buried by the hijacker, scattered from the fall or found by someone and then buried, but the serial numbers matched the money given to Cooper.

This investigation began when a tipster came forward in 2011, claiming to know how the money got there.

Colbert, who has co-written the book, “The Last Master Outlaw,” on the five-year case, said Rackstraw has eluded authorities with the help of more than 20 fake identities.

“This has been a scab on the side of the FBI,” he said.